Innovative on the market since 2009

IONTIS Elektrostatik GmbH is a family-run company which was founded in 2009 by Thomas Ludwig and built up with the active support of his wife Ulrike Rüdiger-Ludwig. The market focus is on the German-speaking countries, although the company also sells internationally.

Shortly after the company was founded, the in many respects unique and ultra-innovative and patented E5000 electrode v1 was sold to the first customers: already in 2009 in 24 VDC technology with integrated high voltage generation, bipolar i.e. only one tip row with a fine spacing grid, intelligent as it regulates itself in terms of distance and polarity, with a connection for control by a sensor and in addition to a built-in contamination monitoring system which is still the only one on the market today to detect and gradually display both conductive and non-conductive contamination!

Unfortunately, Thomas Ludwig, who had previously worked in leading positions for an electrostatic market attendant, died unexpectedly and much too early in 2013. Since then his wife has been running the business and is supported by her sons, who are also the knowledge carriers of the products. 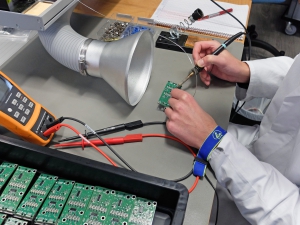 Our own products are manufactured entirely in-house here in Germany, Fraser products in the UK. The E, F and A series electrodes are all custom made to customer ordered lengths. The well thought-out component design ensures that a good price/performance ratio can be maintained despite the fact that they are made to measure.

Due to the high competence of our developers and production specialists, it is easy to react to customer requirements. Thus, special designs of products such as special connections, mounting aides or bars pre-assembled on mounting profiles can be implemented flexibly. Also we can colour some products and provide them with customer logos on request. 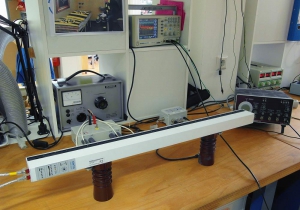 During the production of the products, the functionality of the products is repeatedly checked and ensured with in-process controls: in the case of our E5000 electrode, for example, 3 intermediate controls/measurements have already been carried out up to the final test before delivery.

A thorough final inspection is not only carried out for in-house productions. We also check internationally delivered products of our partners to ensure that the goods leave our premises in perfect condition.

countries of a portfolio